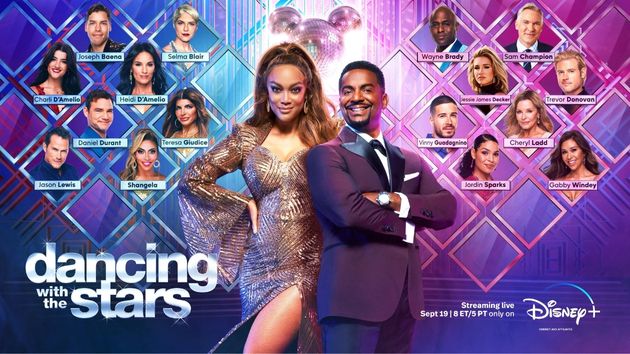 Monday marked the grand return of Dancing with the Stars, which premiered exclusively on Disney+.  The night’s premiere was full of firsts, including a happy change for Canadian fans, who can now vote for their favorite stars online.

Unfortunately, the journey ended for Sex and the City ﻿star Jason Lewis, who was the first star to be sent home after a nationwide and international vote. Real Housewives alum Teresa Giudice was spared by the judges and will return next week.

Starting off the new season of DWTS was American Idol alum Jordin Sparks with a glamorous cha-cha to Whitney Houston‘s “I Wanna Dance with Somebody.”  Although Sparks finished the night with one of the top scores, she is competing in a crowded race for the Mirrorball Trophy.

D’Amelio, who has a background in competitive dance, took a commanding lead with her top-scoring cha-cha while Brady, who admittedly offered minimal dance experience, finished the night in second place with his jubilant cha-cha. Shangela, the franchise’s first Drag competitor, finished one point behind Brady and was praised by judge Len Goodman for the way she balanced her technical skills and stage presence.

As for Windey, she stands to continue the winning streak started by former Bachelorette stars Hannah Brown and Kaitlyn Bristowe, who won their respective seasons, thanks to her lively jive.

Durant, who is fully deaf, dazzled with his tango to Duck Sauce‘s “Barbra Streisand.”  The actor told the judges via his interpreter Gabe that, although he is unable to hear the music, he can feel it with his body. Durant also joked that he already has an Oscar, so a Mirrorball Trophy is naturally the next step for him.

Blair, who was diagnosed with multiple sclerosis and sometimes struggles with mobility and speech issues, performed a triumphant a Viennese Waltz to David Cook‘s “The Time of My Life.”  Her emotional performance, which started with her symbolically leaving her cane behind, moved the audience — and judge Carrie Ann Inaba — to tears.

DWTS returns next week at 8 p.m. ET on Disney+. Next week, the competitors will get a taste of Las Vegas as the show will honor the legendary Elvis Presley.

Here are the current standings: